In this episode of the ProfitEngines podcast, Matt discusses how to take advantage of lower costs and seize market share while there is less competition.

For all you know, you could be getting leads for half the price with better ad copy or a more engaging image or video. But until you test it, you’ll never know whether your control really is the absolute best.

Use this less competitive time to experiment with different headline copy, images, videos, and even new ad formats, such as Stories ad placements or Canvas ad formats.

Get Notified Of Future Episodes: 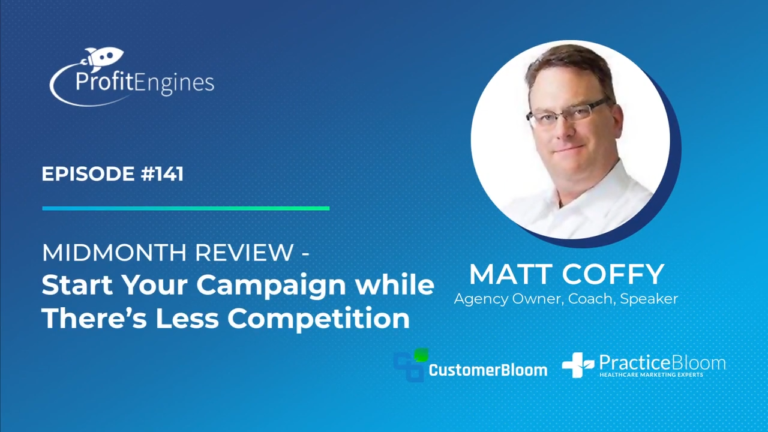 Ok. Matt Coffy here with our mid month review. This is a July review. We’re going to talk about a couple of things that will hopefully keep you interested to just listen for a little bit about what we’re experiencing. We’ve been working with hundreds of med spas, vein centers, plastic surgeons, chiros, radiology, spine, PT, boy, you name it. We are in it, in a lot of wellness centers and different types of variations. The key here is to think about what’s happening in the market. There is a huge demand, a huge demand right now, a curve that we have never seen before, especially in the Northeast happening. In July alone, we’ve seen some record months with some of our clients. Now that means that the market is becoming huge going out. They are seeing people drive to procedures. They’re seeing videos of people on Facebook getting procedures.

And that’s the key. What we see, especially in the South is not a decline. And you’d think with spiking cases now of Florida, Texas, and some of the Southern States that there would be a lessening and there would be challenges. We’re not seeing the case. I don’t think people in the South have got the same perception as the North, where up here, there’s masks and gloves and still people in their cars with masks on. It’s not the same in the South we’re seeing. We’ve always seen the pretty much a flat, just sort of growth here in the Northeast. It’s absolutely skyrocketing right now, as people are springing up and just saying, “You know what I’ve had enough of going out. I’m going to do this” but they’re serious. And that’s the thing I always like to see, which is that our conversions going up, costs coming down because more people are going out that are serious because there are only going to go out if they’re really serious.

They’re not going to go and fill in a form and not show up because literally like, this is like their thing. This is they’re out there. A lot of people are working from home and they want to get out, do something and they’re gonna plan their day around something like this. So if you’re not electric procedure, you have to think about what’s going on in people’s heads. Now, another thing to consider is about the cost per lead. A lot of medical marketing has been shut off, meaning that clients, we had a lot of clients leave us, just because they said, “I’m not going to do it there.” They’re not gonna turn on. They decided to not to come back. They literally just shut off and they’ve turned their practice down. We see about 50% of these practices that are off.

So your complete competition is gone. You have the opportunity of a lifetime to go out and work in a field that has less competitors. How often does that happen? It’s usually the opposite. More competitors are coming in. Now you’ve got less competitors, so you can get more conversion because people are more apt to convert because they just want to go out and do something they want to convert because they want to go out there. Serious. Costs come down because there’s lower competitors. It is a perfect storm. It is the time to start to market. We’ve never seen anything like it with Botox costs $2 to $4 per lead at some point this week. Unbelievable! CoolSculpting leads at $25 a lead, vein center, same thing, $25 to $50 per lead. These, the return on investment’s absolutely there. So again, not just in aesthetics and medical practices that are, you know, sort of cash paid, but also in the PT and the chiro world was seeing great cost per leads around $14 for like a $39 special to come in or in the PT world where we don’t really use specials per se, because there really isn’t a money off because it’s all insurance – based.

We’re seeing a lot of uptake when we start to hit specific targets and people who are, there’s a lot of people getting injured because obviously they’re all working out from home and they’re all running around now. So they, even, unfortunately my wife even broke her toe this weekend. So you know, it’s almost as if there are plenty of opportunities and all across the boards where there is opportunity to really dig into the market where there is some gold and then there hills because you are not facing what normally we see. So let’s talk about what’s going to happen. September is going to hit, whether or not you believe it’s going to get worse or better or stay the same. Neutrality in this market is about the best thing we could do. Just staying steady. We’ve seen the, some of the practices that have been running since March and they never stopped.

They’ve stayed steady and gone up. And they literally, they had two months of pause, but just taking data. And then they sprung back as people got back into the systems. But in all reality, consistency now, when you’re talking about mid- July and let’s see, you want to get started. Hey, you know, I’m ready to go for a campaign and I want to get started and I want to run Facebook ads and for my practice, or I want to get stuff started for my, for the office. You’re looking at like two weeks to get started now. So actually, so let’s just say you’re taking on whether it’s us or another marketing company you’re getting started, it’s going to take you two or three weeks to get up and running with everything. And then a couple of weeks to get actually people to come in.

So it’s almost like a, I’d say almost a six week window. So now you’re talking literally into August and you’ve got that August lull. So now you’re really talking about fall for real predictably, like good lead flow. You’re going to get good lead flow for the first couple of weeks in August, but then it’s going to die out as people go out and then they come back in and that first week of September and that that those two or three weeks of September are going to be the killer weeks. Cause I think you’re going to find that that’s going to be one of the best times of all this year to be marketing because people will be back with some sense of normality. They’ll have some sense of reality that they can actually do stuff. Because even up here in the Northeast where we have the hardest lockdowns and all this they’re talking about school.

So I do think that, you know, if you’re looking at saying, “Okay, I want to get this started, but I don’t know when I’m trying to pick the right time,” you’ve got to get impacted right now into thinking through this process for actually September because that’s when everything’s going to hit. So I think if you were to say, make your decisions about looking now at a eight week run where you want to think about what you’re going to be doing eight weeks from now, what do you want to, how many patients do you want, what do you want to look like. Because that’s really where this will actually hit. So if you’re considering doing this, you’re considering getting engaged with a marketing company like us or again, trying to get leads flowing. This is the time to work for your beginning of September strategy right now. I implore you to think about the fact that things are going to change. Spikes will come down. There will be some impact. There’s going to be some vaccine at some point. And the people who start getting into data and running their campaigns strongly now are going to reap the rewards. We’ve seen it back in the fall of every single year it goes by. It’s like the fall comes, people’s rush into us. And they’re like, “Oh, I gotta get my campaign up and running, it’s September.” And by the time it’s up and running, it’s October, November, they’ve missed six weeks of really good revenue, same thing in the spring. We see it all the time. People rush to us in April and they, they now turn on for May and they miss sort of the whole first two weeks, three weeks of April where they could have gotten.

We didn’t have that this year. Remember we missed an entire section. A lot of the country missed their whole spring selling season. So you’ve got to make sure that you’ve got to be running in the fall. You’re going to have to catch up on revenue. It’s the time to do this now, before it’s too late, before the competitors enter the market, you’re talking about about 50% less competition. Again, costs are down. Conversions are up because people are serious. They’re going out. They’re actually going to go out there, not tire kicking. So do yourself a favor, invest some time into looking into doing campaigns if you haven’t already. And for those who are running campaigns, I’m sure you’re seeing some of the good positive impacts that are happening right now.

So I implore you as someone who sees this from across the country, hundreds of accounts, hundreds of campaigns, there is really good opportunity to coming in this fall time, but you’ve got to get engaged now. By the time you roll around to September, if you’re waiting through the summer to see how it will be, you’re really missing the boat. You’re going to miss that six week, eight week sort of area, where there is the maximum amount of revenue gained probably for this year. As people are going to be going back to some sort of normal. Anyways, I hope this finds you well. And they’ll talk to you in the next mid month.