As a medical practice, staying on top of the latest trends and practices in the industry is essential for keeping your clinic fresh and your customers hungry for more. In this episode, we discuss the latest and most popular Medical Aesthetics offers out there this January — so you can offer your customers exactly what they want.

We answer the question: what are the latest popular trends in the industry? We start with 6 current trends popular in January, and everything you need to know to get the most out of these offers: cross-selling, time-exclusive deals, and more. We discuss the latest updates on thread lifts, RF skin tightening, and cellulite treatments; and how client behavior has changed: how customers choose their clinics, the use of deposits during the pandemic, and the latest medspa equipment discounts. Update your knowledge on the industry with our discussion, and figure out the best way to grow your business and sales today.

Get Notified Of Future Episodes: 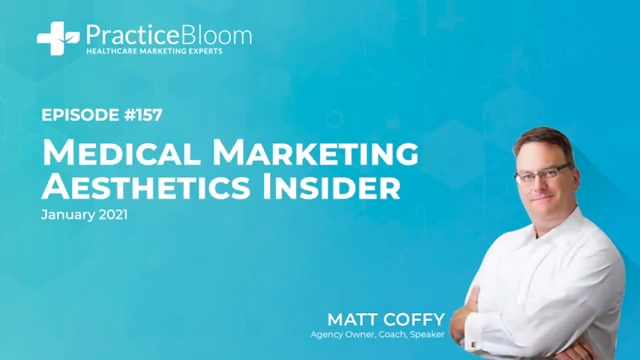 MATT COFFY: Okay, welcome. This is the January edition, 2021 or early February, as you probably are watching this of the medical marketing aesthetics insider. So we’re going to be doing this each a couple of weeks to give you insight of what we see of what’s happening in the market. So this is a unique positioning. We deal with a lot of the exterior and interior issues of both med spas and aesthetics practices across the country. We’re going to tell you what we see from a field level view and things that you can take as something that would be a strategic leap for you potentially into some new markets and some new ideas. So let’s start it off with number one. So over finding in the markets today is that body sculpting is a very popular item, however, people can’t afford it. So how do you get around the “it’s too expensive, but I want to do it” strategy.

MATT COFFY: Well, it might be too expensive now. And that’s the question because most people, especially in the Northeast or the East where the weather hasn’t changed, yet, and won’t change for another couple of months. This may be on the back burner in their mindset that they want to get a body sculpting done. So , the thing that we’re seeing that people can do is do a hybrid offer. So you can offer a service such as laser hair removal, Botox, fillers, whatever the smaller ended , short revenue service is, and offer a huge discount on body sculpting and things that we know are very revenue focused services, to entice people to come in later. Now, the trick about this is that you have to absolutely have timing on those receivable coupons or receivable kind of call. Let’s just say it’s a gift card, because if you really do it right, if you give somebody a gift card, that’s something you give them.

MATT COFFY: But body sculpting is really important when it comes to the spring. And how do you get those people to come in? Well you give them a huge offer that they can redeem and that redeeming coupon or gift card that they get expires over a period of time, it expires in the fact that it goes down in value. So this is the critical component. Over time, the lower the discount goes is based over time. So at their 30 days, let’s say it’s a 35% discount off of something after let’s say 45 days, then it’s 30. And then after 60 days, it’s 20, you can kind of get the consumption here, which is that you want to give a time-based offer for someone to come and pick up the body sculpting, because we know that people are pretty much pretty simple. They want to take advantage of offers, but you have to make it easy for them to understand when those offers are to turn sour.

MATT COFFY: So if you give them a time based offer, once you bring them into the office and you give them a cross sell to a higher ended service, you don’t sell it, but you give them the offer, meaning that you give them the percentage discount or, or a gift card, which is even better, make sure that that has a trailing discount based out of over time. That way there’s more proclivity for them to use it. That’s the best thing that we’ve seen so far in that market to sell body sculpting up, sell it. If people are not ready to buy it, number two. So we really want to see thread lifts. Thread lifts are incredibly important today. However, being that it’s a new service, it needs to be educated. You can’t even really sell it until you explain it to somebody because there’s a lot of misunderstanding the market.

MATT COFFY: So what we really would suggest is part of your discussions now, if you’re going to be doing Thread Lifts, it has to sort of come in as a secondary discussion at a point of sale. So it’s difficult to sell it directly to consumers. It’s not super easy to pitch something that really needs to be explained by, someone who’s, experienced. This is literally, a procedure that we know non-invasive or less invasive, and can really have an impact when you start thinking about the opportunity that you can do when you explain this to somebody. So we need to make sure that we’re utilizing the timeframes of how we want to make sure we engage with people. When we have Thread lifts as an opportunity, it is one of the most biggest selling products that is going to come through in 2021. It was started in 2020 when it really got sort of the ball moving, the momentum, but now it’s starting to really become something.

MATT COFFY: That’s going to be driving a lot of market behavior, because we know that instead of people doing a traditional facelift, they can go into the market thread lifting if they’re educated and that’s going to be the job of the practitioner when you have a point of sale customer, and that’s the critical component. So let’s talk about the next step or next thing, which is number three, too much information in the market. So a lot of the med spas that we talked to today, many of them are concerned about the un ending amount of marketing companies and unending amount of different things that we see are happening in the market, which is they’re getting so many offers and so many different things that are in their per view when it comes to Instagram and Facebook and Google has so many people approaching them.

MATT COFFY: Here’s what I would suggest: do the Lindy test. So if you’re looking to hire a marketing company, give them the Lindy tests. There is a fairly famous diner in New York city that stays open late at night. A lot of the actors from the plays on Broadway go there late at night and they discuss why certain plays have, are doing so well. Why is Cats in its seventh year? Why is boys and girls or whatever the play might be keep on going and why, why, why, the reason why it’s going is because it’s good. And that’s why it’s got a long-term effect. So one of the things you may want to ask when you’re working with a marketing company is if they’re any good, they’d be around for a long time. That doesn’t preclude people from being good, agencies and good companies that will help, medical spas like yourself that are in a short duration of time of existence.

MATT COFFY: But the ones that have been around for 10 years or greater show, the Lindy effect, which is they’ve been there, they’ve got to be doing something right, or they wouldn’t be around. So consider the history and the long-term effect of a positive outcome. If you’re working or looking for agencies, make sure you have a history of performance. Number four, radio frequency, RF, going alongside CoolSculpting. Services such as Evolve are coming around, providing tightening services along with the reduction, with the body sculpting services that are really aiding in selling a complete solution. We’re finding that these types of RF services are really becoming a necessity as we go into 2021, incredibly important for the consumer as well, because you’re absolutely going to give them a better performance with the different types of services. Now, what we’re seeing in the market, and you might want to entertain this thought, is people doing one time services, for example, doing 250, 1 spot, come in.

MATT COFFY: And then obviously when they get there, there’s some other options instead of selling packages where they would get three locations or four locations over a period of time and selling them a whole package, with these new RF services, there’s such a dramatic impact that there’s, potential to really add on services, at point of sale or continue the process of getting them in over a period of time, for secondary services. But really we’re seeing the market go to, ” Hey, give this a shot for one time, try it out for 2 50 for one location,” And of course, a lot of these services, because, there’s, you know, there’s limited, ways for payment services, not as similar to CoolSculpting, but there are unlimited runtimes. There’s some opportunity to sell the services where obviously the margins are going to be better.

MATT COFFY: Number five, which is deposits. Of all the times in the planet, when you can ask for deposit, if you make this one comment: “Because of COVID, we need a deposit because we have limited space, limited ability limited this, limited that, we’ve been restricted.” Of all the times on the planet, when a customer would go, “Okay,” would be now, because they know that everybody has to sort of abide by the rules. People are being told what to do by our government, by our States, by our president, but whatever. We’re being told, here’s what you need to do: “Wear a mask, six feet, social distance, do this, do that, do that, wash your hands, give a deposit.” “Okay.” Just remember that people are very much at this point, understanding that there is some consequences because of this situation. So ask for a deposit as you go through the sales process.

MATT COFFY: So you have less, no-shows less people disappearing, less people kicking tires because that’s the game. Number six GPO pricing. So we want to talk quickly about GPO pricing. If you do not have a GPO pricing provider, you should find someone who does have it. We provide GPO pricing to our clients. Through our relationships. You can get up to 60% off of your needles , of your sponges, of all the things you could possibly use in your office. But you’ve got to use a GPO provider. GPO stands for group purchasing organization. So if you are not using a GPO, contact someone like us who has relationships, and we can put you in touch with people who can give you these discounts off of products and services that will improve your margins. It will make sure that you’re getting a good deal on what you’re purchasing, what you’re purchasing lots in volume. If you’re doing lots of types of repurchasing, this is a key element to get your margin straightened out, to help you with cost per sale. Alright, that’s the end of this episode. I hope it helped. We’re here to help you at Practice Bloom. Again, it’s Matt Coffy, CEO signing off. We’ll see you soon.